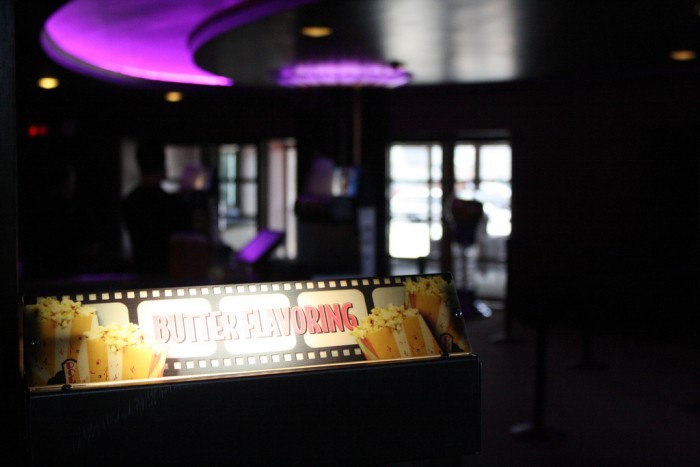 In case you were running out of places to go to fight the cold outside, you might want to give the movies yet another run. We’re sure that by now you’ve taken in at least one blockbuster (Annie, one or more of the Hunger Games flicks, American Sniper, etc.) and at least one 3D/IMAX film for kicks and considering the fact that this winter was especially cold, it’s possible that you even made multiple trips to the movies as a way of thawing (we mean bonding!) with loved ones.

The advancements made in movie magic since even the early 2000s are pretty impressive in regards to the special effects, sound quality and overall comfort in the theatres… but brace yourselves movie fans, because here in the Live, Work, Play community, cinema is going even bigger.

By Bigger, We Mean Bigger (Which, Contrary to Popular Opinion, Is Better)

Dear Movie Lovers at the Residences,

Delaware’s largest mall has introduced Delaware’s largest theatre to the masses and this colossal entertainment venue is your next stop for battling the temperamental weather. If you’ve yet to visit Cinemark Christiana and XD, here’s a small taste of what they have to offer:

Coming to the Big Screen this Season

The upcoming months have an excellent cinema roster regardless of your genre of choice. In fact, a genre-defying film by the name of Unfriended is set to hit the big screen, bringing with it a new brand of horror. The roster isn’t lacking classics either. Disney’s highly anticipated Cinderella remake is already playing along with Furious 7, a film that is rumored to be the last in the legendary Paul Walker series.

Sections of the monumental Cinemark Theatre are available for rent to the general public. These venues can be utilized for:

Wilmington, Delaware is constantly making positive changes to its surrounding landscape. Spend a night at the movies and wake up in the city that understands the value of large scale entertainment by getting in touch with a Live, Work, Play ambassador.