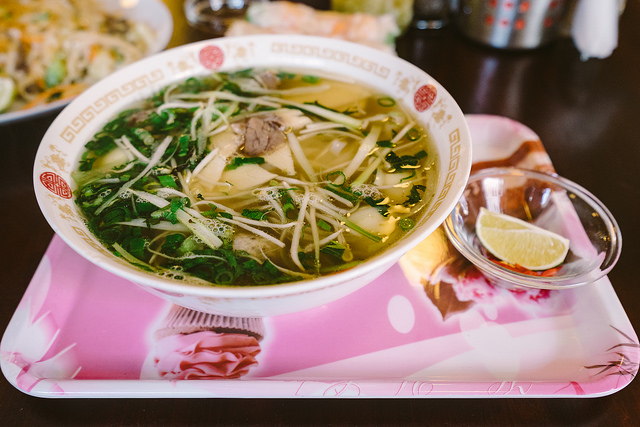 This Weekend, Explore the Menu at vPho, a New Spot in Newark

At vPho, the vegetarian menu isn't just an afterthought. Before it opened at the beginning of June, the founders of this Newark eatery spent as much time designing their meat-free menu as they did dreaming up their meat-based Vietnamese cuisine. The fact that they offer nearly 20 veggie-centric options speaks to this fact, and it also proves that you don't have to sacrifice flavor to go meat-free.

The veggie dumplings, fresh summer rolls, and veggies pho feature flavors that are just as complex and enticing as their traditional counterparts. Of course, the main event is the pho, and there are tons of options for meat eaters. The classic beef pho comes with your choice of three meats, including rare steak, brisket, tendon, tripe, or meatballs. If you want to try all of them, order the signature pho dac biet, which boasts every type of beef possible. For something lighter, opt for the shrimp pho or the chicken pho instead.